Q&A: ARLIE HOCHSCHILD, Strangers in Their Own Land: Anger & Mourning on the American Right. What new story can make Americans yearn for the future more than the past? 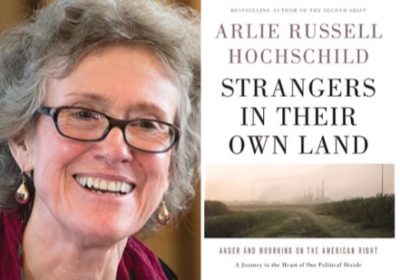 Soon after the 2016 election, I discovered this quote from Antoine de Saint-Exupery, who’s most famous for writing The Little Prince. Here’s the quote. “If you want to build a ship, don’t drum up the men to gather wood, divide the work and give orders. Instead, teach them to yearn for the vast and endless sea.”

My question is, how do we do that in 2018? That day, a bit over a year ago, I wrote the following: “Passion to return to a simpler past drove enough voters to the polls in swing states to decide the 2016 presidential election. How can we engage their emotions in a more positive forward-looking or progressive direction? When you offer people the preservation of the present, or the return to the past, when you offer to postpone or eliminate change, as Trump does, your audience has an experience to draw from. And for many, an inflated or idealized vision of the past has a clear advantage over the yet-to-be-experienced future, the uncertainty of that future.

Can we generate a vision of a future that is as welcome, compelling, inviting and real as the past some so fondly remember? Let’s start with the following questions. What is a compelling narrative that can drive Americans to yearn for a future richer than the past they want to come back? What vision could we offer to engage their emotions, because clearly, emotions are at play here, that will fuel their yearning rather than feed their fear? And who can do this, and who should do this, and who is doing this?”

Ever since that day, I’ve been wanting to talk with today’s guest, Arlie Hochschild, professor emerita of sociology at UC Berkeley, and author most recently of Strangers in Their Own Land: Anger and Mourning on the American Right.

For over 30 years, her inventive and provocative and useful insights about contemporary work and family have grown out of research. She’s done the interviews, she’s spent time with the people, and she has long focused on the human emotions which underlie our moral beliefs, practices and social lives.

Known as the founder of the sociology of emotion, she’s the author of several books including Second Shift, The Time Bind and The Outsourced Self. At the core of her most recent book, Strangers in Their Own Land, is the power of a story. After five years talking with folks in southern Louisiana, Hochschild sensed that a particular deep story they share is what holds their political contradictions together. I want to hear more about the power of that narrative and ask what she thinks is possible in terms of coming up with another narrative, a narrative that offers an inviting and inclusive future. I imagine she will say, “Start by listening.”

Welcome, Arlie Hochschild. You laughed and said that, in fact, that would be your first advice, wouldn’t it?

Hochschild:
I think it would, I think it would. And to not be frightened to sit down and respectfully listen to people that you know going in are going to be different from you in their outlook, their premises.

But, to pick up the challenge you just posed… After you’ve listened, what kind of a vision could one put forward. The people I came to know in researching Strangers in Their Own Land over five years in the center of the petrochemical industry in Louisiana, very right wing, everybody went for Trump, I got the feeling that they would be very interested in a vision which, for one thing, is unifying.

Link to the podcast interview
END_OF_DOCUMENT_TOKEN_TO_BE_REPLACED

How much technology do you use? Email, texting, facebook, twitter, second life, etc. How's it working for you? Has it freed you up, given you more time, or has it added new demands to your life that actually make you feel you have less time? If you're using social media regularly, do you feel more connected with your friends and family or less?

Clinical psychologist SHERRY TURKLE has been studying our relationship with technology for most of her career, and has written several books about what she's experienced and learned. Of her newest, ALONE TOGETHER, she has said, "This is a book of repentance. I have been studying computers and people for thirty years. I didn't see several important things. I got some important things wrong." I was already interested in talking to her, but that really grabbed my attention. I'm interested in people, maybe especially experts, who are willing to change their minds.

Turkle writes: "Technology promises to let us do anything from anywhere with anyone. But it also drains us as we try to do everything everywhere. We begin to feel overwhelmed and depleted by the lives technology makes possible. We may be free to work from anywhere, but we are also prone to being lonely everywhere. In a surprising twist, relentless connection leads to a new solitude. We turn to new technology to fill the void,but as technology ramps up, our emotional lives ramp down."

System Failure: We Are Approaching the End of Society As We Know It — And That May Be a Good Thing

Paul Gilding says it’s time to stop worrying about climate change; global crisis is no longer avoidable. He believes the Great Disruption started in 2008, as spiking food and oil prices signaled the end of Economic Growth 1.0 based on consumption and waste. Coming decades will see loss, suffering and conflict, but he believes the crisis offers us both an unmatched business opportunity as old industries collapse to be replaced by new ones, and a chance to replace our addiction to growth with an ethic of sustainability.

Gilding has been involved with activist campaigns on a wide variety of issues and served as executive director of Greenpeace Australia and Greenpeace International. He founded Ecos Corporation in 1995, consulting to some of the world’s largest corporations on issues of sustainability until its sale in 2008. Gilding’s first book is The Great Disruption: Why the Climate Crisis Will Bring on the End of Shopping and the Birth of a New World.

Terrence McNally: Could you briefly talk about your path to the work you do today?

Paul Gilding: I started as an activist really very young. Age 14, 15, I got involved in a variety of issues and went on from there through 19 years of traditional activism, more on the human social side than the environmental side. Then through the late ’70s to early ’80s, I got involved in the anti-nuclear weapons and nuclear war movement. That led to a greater understanding of environmental issues, which then led to Greenpeace and very focused direct-action campaigns against corporate pollution. I ended up head of Greenpeace International.

I left there in the mid ’90s, focused on the role of markets and companies. How could we mobilize the power of markets as a force for good in this area? For the next 15 years I focused on that question, working in the corporate sector, running two companies that I built. Really trying to see if you can drive change through business — from the point of view of self-interest, recognizing that business is driven by making money. That’s their core metric.

Then about four or five years ago, I came to the conclusion that we really had done our best in the environmental and social change movements, but the ecological and system pressures we’d brought to bear on the global ecosystem were now in full flight. Change is going to be unstoppable.

Can Computer Games Save Us All? New Research Shows How Gaming Can Help Cure Our Social Ills

Tech futurist and game designer Jane McGonigle on how computer games can help the fight against AIDS, heal disabilities, increase optimism, and make us better people.

There are 183 million active computer game players in the United States. The average young person will spend 10,000 hours gaming by the age of 21. More than 5 million “extreme” gamers in the U.S. play an average of 45 hours a week. Videogames took in about $15.5 billion last year.

Most of what you hear about this phenomenon is doom and gloom – people becoming addicted, isolated and socially inept. Some worry that gaming is pulling people away from productive work, fulfilling relationships and real life. But game designer Jane McGonigal says the reason for the mass exodus to virtual worlds is that videogames are increasingly fulfilling genuine human needs. In a very popular TED talk — and in her first book, Reality Is Broken, just out in paperback – she suggests we can use the lessons of game design to fix what is wrong with the real world.

Jane McGonigal is the director of Game R&D at the Institute for the Future and creative director of Social Chocolate. BusinessWeek called her “one of the ten most important innovators to watch.” Oprah magazine thinks she’s “one of the twenty most inspiring women in the world.” And MIT Technology Review named her “one of top 35 innovators changing the world through technology.”

Terrence McNally interviewed McGonigal for AlterNet by phone from her home in the San Francisco Bay Area.

Terrence McNally: I see four strands in what I’ve read about you and your work: Buddhism, games, positive psychology, and entrepreneurism. How do you describe your path?

Jane McGonigal: That’s a pretty good breakdown, I like it. I think, first and foremost, I try to help people unleash their real-life superpowers to bring out the best in them so they achieve epic wins lead extraordinary lives, and be of extraord

July 26, 2011  | Gretchen Morgensen was awarded the Pulitzer Prize in 2002 for her “trenchant and incisive” coverage of Wall Street and has been on that beat ever since. Her new book, Reckless Endangerment: How Outsized Ambition, Greed, and Corruption Led to Economic Armageddon (written with Joshua Rosner), lays out the toxic interplay between Washington, Wall Street and corrupt mortgage lenders that led to the meltdown. It examines how the watchdogs who were supposed to protect us from financial harm were actually complicit in creating the crisis.

Gretchen Morgenson is a business reporter and columnist at the New York Times, where she also serves as assistant business and financial editor. Prior to joining the Times in 1998, she worked as a broker at Dean Witter in the 1980s, and as a reporter at Forbes, Worth, and Money magazines.