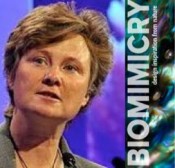 After 3.8 billion years of R&D on this planet, failures are fossils. What surrounds us in the natural world is what has succeeded and survived. Nature has already solved many of the problems we grapple still with. Animals, plants, and microbes are the consummate engineers. They have found what works, what is appropriate, and most important, what lasts here on Earth. So why not learn as much as we can from what works? JANINE BENYUS coined a term and invented a field called biomimicry – which basically means imitating nature.
In order to make things, humans usually beat, heat or treat. We either use intense pressure, intense heat or powerful solvents to produce the chemical and physical reactions in our manufacturing processes – and it’s usually that pressure, heat or chemicals that generate pollution. What if we could produce ceramics the way an abalone does, cables the way a spider spins webs, or filter water the ways so many creatures do?

Her creative brainstorm has grown into a way of looking, working and designing that has enormous potential to save us from ourselves. According to Janine, we are now learning how to grow food like a prairie, create color like a peacock, self-medicate like a chimp, compute like a cell, and run a business like a hickory forest. And she says, “The more our world functions like the natural world, the more likely we are to endure on this home that is ours, but not ours alone.”