According to the Southern Poverty Law Center, “The number of hate groups in the United States rose for a second year in a row in 2016 as the radical right was energized by the candidacy of Donald Trump.” Of a spike in reported incidents of “hate” violence, SPLC reports, “37% of them directly referenced either President Trump, his campaign slogans, or his infamous remarks about sexual assault.” CHIP BERLET has investigated hate groups, theocratic fundamentalism, civil liberties violations, police misconduct, surveillance abuse, other anti-democratic phenomena. 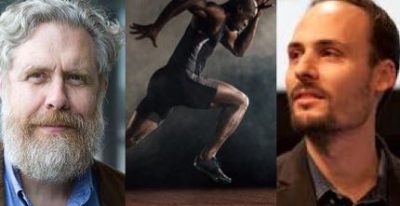 With 100 trillion cells in the human body, bacteria outnumber our own human cells 2 to 1. These bacteria make up one’s microbiome and play a role in our health, development and wellness, including endurance, recovery and mental aptitude.

In this episode of Disruptive, Wyss Core Faculty member George Church and research fellow Jonathan Scheiman explore this provocative question: What if we could tap the gut bacteria of elite athletes to produce customized probiotics – and what if those probiotics could give recipients access to some of the biological advantages that make those athletes elite?

Currently organizing where he grew up in Lancaster PA (as a Menonite), he was involved with Occupy Wall Street and has a lot to say about what worked and what we can learn from what didn’t. Example: The rituals of assembly ended up standing in for strategy, becoming an end rather than a means. Smucker questions the left’s tendency to identify as “the righteous few”, where purity can become an obstacle to amassing enough power to win. He doesn’t use the term “activist” because he believes that (self-)identification separates fighting for peace and justice from the rest of life, and creates an us which can leave out others. Insightful stuff.

Free Forum – Two classic political interviews from 2004 THOMAS FRANK, WHAT’S THE MATTER WITH KANSAS? How Conservatives Won the Heart of America GEORGE LAKOFF, DON’T THINK OF AN ELEPHANT: Know Your Values and Frame the Debate

Originally Aired in 2004 They noticed trends, asked questions, offered warnings and gave advice.
“Why does the pro-life factory worker who listens to Rush Limbaugh repeatedly vote for the party that is less likely to protect his safety, less likely to protect his job, and less likely to benefit him economically?”
– Thomas Frank
“In politics framing is about making sure the debate takes place in language that fits your worldview. Framing trumps facts and self-interest.”
– George Lakoff Twelve years later their worst fears came true.

Since 1991 STEPHAN SCHWARTZ has been following trends that are shaping the future, and has tracked the rise of fascist and identitarian politics, a Great Schism, and the Theocratic Right. His new book 8 LAWS OF CHANGE is based on years of research to show how nonviolent compassionate life-affirming change can be achieved. I’ve subscribed to his Schwartzreport for years – four articles each day with comments – well worth reading.